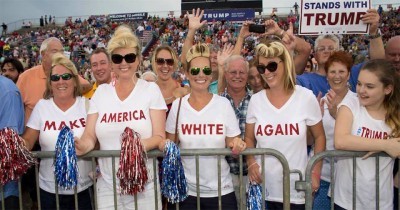 Supporters for Donald Drumpf, a.k.a. Trump.

First, the chilling news from the New York Times:

An 88-year-old white supremacist with a rifle walked into the United States Holocaust Memorial Museum, one of the capital’s most visited sites, on Wednesday afternoon and began shooting, fatally wounding a security guard and sending tourists scrambling before he himself was shot, the authorities said.

The gunman was identified by law enforcement officials as James W. von Brunn, who embraces various conspiracy theories involving Jews, blacks and other minority groups and has at times waged a personal war with the federal government.

I’m not going to comment much.  The story is still raw, and a man died today.  The Holocaust Memorial Museum identified the deceased guard as Stephen Tyrone Johns.

According to CNN, the museum released a statement saying Johns died “heroically in the line of duty.”

“There are no words to express our grief and shock over these events. He served on the Museum’s security staff for six years. Our thoughts and prayers go out to Officer Johns’ family,” the statement said. “We have made the decision to close the Museum tomorrow in honor of Officer Johns, and our flags will be flown at half mast in his memory.”

The alleged shooter is a Christian extremist.  Read this disturbing passage from his book, Kill the Best Gentiles:

Under the Pharisees’ direction the Temple had become the Federal Reserve System of its day. Christ drove the usurers from the Temple with a snake whip, indirectly attacking the Pharisees’ purse. That sealed his fate! The Anti-Defamation League of his day acted quickly. Using standard procedures they defamed Jesus (“L’Infamie”) to get the mob on their side — as centuries later they would defame Marie Antoinette, the Romanovs, Hitler, Gen. MacArthur, McCarthy, et al). Then, Jesus was framed by the Sanhedrin, who had Him arrested, tried, sentenced, and crucified. (Pope John Paul, 1995 A.D., denied the HOLY WORD, pronouncing that JEWS had no part in the death of Jesus Christ!).

I am innocent of the blood of this just man! THE SYNOPTICS: Pontius Pilate.

Other white supremicists seem to be worrying about their image, of all things.  This from someone who calls himself “Messiah” on a Web site called Stormfront, which proclaims the motto White Pride World Wide:

Most know the source of our problems are Jews and their desires to control the whole earth and all that is within it. They’re using our American government, and our money to accomplish that.

Now that being said, shooting up the Holocaust Museum will not change that.

What a Jackass move. This accomplished less than nothing and was just stupid and senseless all around. At least if he had targeted some people directly responsible for the financial collapse I could understand that.

As far as I’m concerned, Sorcerer gets the prize:

That’s all I can read right now.  Personally, I’m going to spend a few moments in silent prayer reflecting on the loss today, working to focus back on the love.