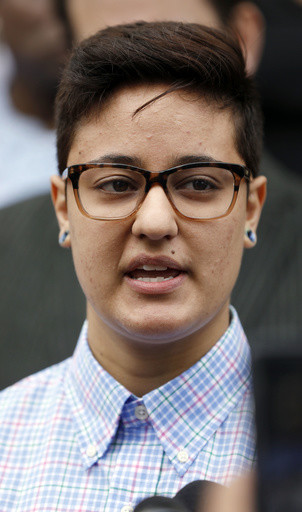 No doubt to the consternation of President Donald Trump (it still aches to type that, to say it), Daniela Vargas has been released from ICE. The freedom of the 22-year-old #Dreamer was heralded by the Southern Poverty Law Center:

Today, Daniela Vargas, a 22-year-old aspiring math teacher, was released from Immigration and Customs Enforcement (ICE) custody. A week ago, she had been detained by immigration agents moments after speaking publicly about immigrants’ rights.

It was a transparent attempt to chill free speech and intimidate immigrants who speak up. We filed a habeas petition to force her release and to stop her deportation.

“But we will continue to challenge the unconstitutional actions of ICE agents in this case and will not rest until she is no longer under threat of deportation. It is counterproductive and harmful to our communities for ICE to be targeting aspiring young people in this country and we urge ICE to release other immigrant youth held in detention.”

Read more about Dany’s case and the SPLC’s efforts to ensure detained immigrants have access to counsel.

Your friends at the SPLC

“A transparent attempt to chill free speech and intimidate immigrants who speak up” indeed. This was ugly and wrong.

As is the Trump-declared war on immigrants.

More about Dany’s case here. Read. Celebrate tonight. Remember the many, many who do not make the news.