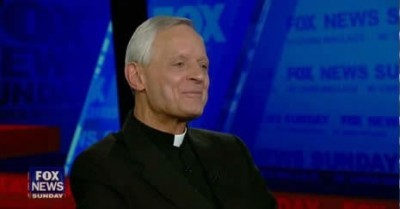 From John Cardinal Wright’s secretary, to bishop, to cardinal.

But, in his heart, at his best, he’s just another pol.

Unelected, mine you.  But a pol nonetheless.

Our friends at Catholics for Equality are trying to talk some sense into him, but his sanctimoniousness won’t listen.

Here’s their release, where they note His Eminence’s blatant electioneering:

Catholics for Equality, the country’s largest national political organization of pro-LGBT equality Catholics, joined hands today with several fair-minded and faithful Catholic social justice groups in organizing a peaceful protest outside the Archdiocese of Washington, DC’s rally promoting the U.S. bishops’ “Fortnight for Freedom” election year political campaign. The Catholic groups came together with prayers and hymns under one giant united banner which read, Bishops: We Need Pastors, Not Politicians, Your Antics are Hurting the Church.

The peaceful protest took place outside a rally held at George Washington University’s Charles E. Smith Center. The special event presided over by Cardinal Donald W. Wuerl was billed as a prayerful service, but was in fact a political campaign rally to motivate Catholics to vote against the re-election of President Obama because of the Health Care Reform Act and his support for LGBT equality. Wuerl and his fellow bishops claim that the exemptions provided in the Act are not sufficient for the Catholic Church and that they are being victimized by the federal government. Furthermore, the bishops claim that the Act is the greatest infringement upon religious liberty in American history and see themselves as martyrs like St. Thomas More, St. John Fischer, and others in church history.

“The bishops no longer represent Catholics in the pews on so many social issues, from contraception to legal equality for LGBT people,” said Joseph Palacios, Director of the Catholics for Equality Foundation. “We also reject the bishops’ election year campaign that they are now somehow victims of religious liberty, especially as the U.S. Catholic Church receives 62% of its funding for Catholic Charities from federal and state funds — money coming from the taxes of all Americans. Catholics Charities in Washington, DC, receives 68% of its funding from taxpayers. This does not include taxpayer vouchers for Catholic schools and other support for Catholic health care programs. If the bishops want exemption from the law, then they should stop receiving taxpayer funding.”

According to a new report released this week by the Public Religion Research Institute, 57% of American Catholics do not believe that the right to religious liberty is being threatened in America today. The report also notes that 65% of Catholics believe that most employers should be required to provide their employees with health care plans that cover contraception at no cost and that 63% believe religiously affiliated agencies should not be able to refuse to place children with qualified gay and lesbian couples.

“The bishops’ 2012 “Fortnight for Freedom” campaign is nothing more than election year political posturing,” said Phil Attey, Executive Director of Catholics for Equality. “For the past 10 years the bishops have earned the public branding of abusers, oppressors, and political bullies. They’ve lost the ear of Catholics in the pews and political leaders in Washington … including Catholic political leaders. In order to change this political reality, the bishops know they have to first have to change their public image. But instead of doing so by championing social justice issues — fighting for the poor, the sick the marginalized and the oppressed, as bishops have done in the past — our bishops are opting to run around spending our collection plate money on a campaign to claim they are the real victims in today’s society. Catholics aren’t stupid, though. We know what we see and we’re not buying it. The bishops are only bringing more embarrassment to our church.”

The USCCB’s “Fortnight for Freedom” campaign launched this week consists of events in over 37 dioceses across the country. The campaign officially concludes on July 4th with a nationally televised Mass at the Basilica of the National Shrine of the Immaculate Conception in Washington, DC, though the bishops’ election year political activities are expected to continue all the way to election day.

Catholics for Equality empowers pro-equality Catholics to put our faith into ethical and effective political action on behalf of the LGBT community and their families.

Catholics for Equality was founded in 2010 to support, educate, and mobilize Catholics in the advancement of freedom andequality at the federal, state, and local levels for our lesbian, gay, bisexual, and transgender family, parish and community members.

Will no one save us from these meddlesome clerics? They, who now claim moral authority, after decades of shielding pedophiles.

Will no one save us?

Video: A Glimpse of the Future if Mitt Romney Is Elected President

A glimpse of the future if Mitt Romney is elected president.

The future mirrors the past.

"Romney economics won’t work. It did not work in Massachusetts, and it’s not going to work in Washington."