A great interview with Barack Obama by Jon Stewart.

Believe it or not they’re still questions being raised about Barack Obama’s birth certificate. The Obama campaign debunked rumors in June, but persistent rumors are still circulating around the Internet that the Democratic candidate for president was not born in this country.

According to the Chicago Tribune, conservative critics have suggested that Obama may have been born outside the United States and is not a “natural born citizen” eligible for the presidency. These critics produced no evidence to support their assertions.

It’s amazing to me that this close to the election this type of rumor and innuendo is still circulating.  The persistence of these rumors only gives further credence to the fact that the McCain campaign simply has no real issues. They rely again and again on tilt by association, as well as ridiculous assertions about Citizen Obama’s lineage.

Read more about this ridiculous controversy at the Chicago Tribune.

Is Barack Obama a Socialst?  Why not ask THE Socialist candidate for President?

Thanks to Michael Moore for this one.

I couldn’t believe what I was hearing.

I watched the NewsHour with Jim Lehrer this evening.  Robert Kiddle, the editorial page editor of The San Diego Union-Tribune, explained why his editorial staff endorsed John McCain.

During the interview, Kiddle gave Obama credit, saying he was “articulate.”

Yup.  He really said it.

So what’s the problem with the word “articulate?”  I’ll let Lynette Clemetson explain:

It is amazing that this still requires clarification, but here it is. Black people get a little testy when white people call them “articulate.”

Anna Perez, the former communications counselor for Ms. Rice when she was national security adviser, said, “You just stand and wonder, ‘When will this foolishness end?’ ”

That is the core of the issue. When whites use the word in reference to blacks, it often carries a subtext of amazement, even bewilderment. It is similar to praising a female executive or politician by calling her “tough” or “a rational decision-maker.”

“When people say it, what they are really saying is that someone is articulate … for a black person,” Ms. Perez said.

Make sure you click over and read Clemetson’s entire article, Mr. Kiddle.  As an editor of such a prestigious newspaper, you should be more mindful of the nuances of language.

Unless, of course, you already are.

Listen to Kiddle here at the Jim Lehrer NewsHour. 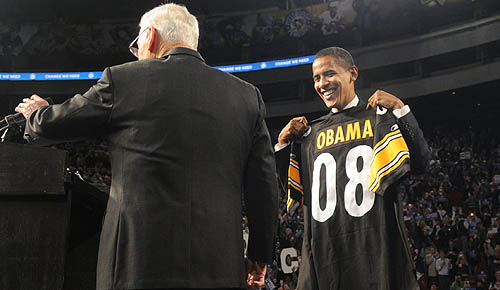 From the New Republic:

This week, Fried announced that he has voted for Obama-Biden by absentee ballot. In his letter to Trevor Potter, the General Counsel to the McCain-Palin campaign, he asked that his name be removed from the several campaign-related committees on which he serves. In that letter, he said that chief among the reasons for his decision “is the choice of Sarah Palin at a time of deep national crisis.”

Fried further clarified his reasons for his move to Obama-Biden:

I admire Senator McCain and was glad to help in his campaign, and to be listed as doing so; but when I concluded that I must vote for Obama for the reason stated in my letter, I felt it wrong to appear to be recommending to others a vote that I was not prepared to cast myself. So it was more of an erasure than a public affirmation–although obviously my vote meant that I thought that Obama was preferable to McCain-Palin. I do not consider abstention a proper option.

Fried is listed in a May 6, 2008 press release on John McCain’s web site as a member of the McCain campaign’s steering committee.  As late as September 15, 2008, McCain’s campaign had Fried listed as a member of McCain’s Honest and Open Election Committee.

Thanks to our friends at Drinking Liberally in New Milford for the nod on this one.

In other campaign news, salmon fisherman Seth Kantner apologized on behalf of the people of Alaska for inflicting the diva on the lower 48:

I’m an Alaskan — born in an igloo, enjoy whale muktuk, all that — and in case you aren’t sick of our state by now, I’ll start off with an apology for one of our residents: Sarah Palin.

We Alaskans are not generally so magazine-pretty like her, nor are we so confrontational and vapid. Most of us don’t have those peachy cheeks — we have sunburn, windburn and frostbite. Our fingernails are dirty from actually gutting moose, not yakking about it. Our hands are chapped from picking thousands of salmon out of nets, not holding one up for the camera.

Mr. Kantner brushes off Palin’s claim that being mayor gave her the administrative experience to serve as President of the United States:

Tougher in Alaska? Not necessarily. Here most anyone can be dogcatcher, city planner, governor, with little or no experience. That’s one beauty of our state — although, often the only thing keeping it all working is the lubrication provided by obscene amounts of money.

Sitting on this worn-to-the-hide bearskin chair of mine, scribbling, I pause to glance at a month-old newspaper before I stuff it in the stove. Lo! — there’s yet another photo of Gov. Palin; she’s sitting in a glass office in Anchorage, with a bearskin, too, draped across the back of her expensive couch. Sarah’s wearing heels. The bear’s wearing a fake head with a plastic snarl. In the foreground on a glass table crouches something with pincers — a taxidermied king crab!

I’ll have to show this photo to my Eskimo friends I grew up with. We simply never contemplated such wanton unAlaskanness. Why not eat the damn thing? We ate this bear I’m sitting on, including the paws and jaw and fat — some of which we ate raw; some got rendered for piecrusts.

It’s worth reading the whole piece.

Obama’s Closing Argument – One Nation Together!

There is one America, and together we stand on the cusp of the incredible.

Ester Goldberg : The International Glamour puss of all media..wants us to leave Sarah Palin alone…

My favorite line is the reference to The Lord of the Rings. Classic!

With 10 days until Election Day, long-brewing tensions between GOP vice presidential candidate Gov. Sarah Palin and key aides to Sen. John McCain have become so intense, they are spilling out in public, sources say.

Several McCain advisers have suggested to CNN that they have become increasingly frustrated with what one aide described as Palin “going rogue.”

A Palin associate, however, said the candidate is simply trying to “bust free” of what she believes was a damaging and mismanaged roll-out.

McCain sources say Palin has gone off-message several times, and they privately wonder whether the incidents were deliberate. They cited an instance in which she labeled robocalls — recorded messages often used to attack a candidate’s opponent — “irritating” even as the campaign defended their use. Also, they pointed to her telling reporters she disagreed with the campaign’s decision to pull out of Michigan.

A second McCain source says she appears to be looking out for herself more than the McCain campaign.

“She is a diva. She takes no advice from anyone,” said this McCain adviser. “She does not have any relationships of trust with any of us, her family or anyone else.

“Also, she is playing for her own future and sees herself as the next leader of the party. Remember: Divas trust only unto themselves, as they see themselves as the beginning and end of all wisdom.”

There was a time when I respected John McCain, but he and Palin have built a campaign on lies.  In all honesty, there were many strong choices for the vice presidential ticket on the Republican side — as far as Republicans go.

However, McCain invited the diva to the dance, and it’s prima donna all the way to election day.