Congressman Joe Walsh, who infamously shouted “You lie!” during one of President Obama’s State of the Union addresses, believes we can solve our immigration problem by building moats, and filling the moats with alligators.

What could possibly go wrong?

From the Daily Caller:

A freshman GOP congressman on the House Homeland Security Committee is telling President Obama he’s “game” for building an alligator-filled moat along the U.S.-Mexico border to counter illegal immigration.

“I actually think a moat might be a very good idea and I’m wondering how many alligators it would take to secure the entire border,” Rep. Joe Walsh says in a May 11 letter to Obama.

Here is Rep. Walsh losing it at a town hall meeting in front of his constituents:

Walsh is being challenged by Raja Krishna Moorthi, and I will support him in any way I can.

Illinois has 11 nuclear power plants, more than any other state in the nation. Currently, spent fuel is stored in dry casks and pools near urban areas and sources of drinking water. At the Zion Nuclear Station, 1,100 tons of waste is stored just yards away from Lake Michigan, the source of drinking water to millions of people. A nuclear waste contamination of Lake Michigan would be devastating to the Great Lakes region.

A continuation of the Yucca Mountain project would be an important step in finding a safe, permanent storage facility for our country’s nuclear waste and critically important for the State of Illinois. Click the image below to see a video on what I am doing to move nuclear waste out of Illinois.

Look, here is what I am doing to remove waste from Illinois.

Vote for his Democratic challenger. Whoever he or she is.

Mark Kirk is dancing with the far, far right, which, right now, controls his party.

And his party, the GOP, has put forward exactlyro, “0”, jobs bills.

And they have rejected every bill President Obama has proposed to increase the number of jobs in America.

Paul Krugman on Things to Tax

Let me start with the end, and then you go read the entire piece: “The point I’m making here isn’t that taxes are all we need; it is that they could and should be a significant part of the solution.”

The supercommittee was a superdud — and we should be glad. Nonetheless, at some point we’ll have to rein in budget deficits. And when we do, here’s a thought: How about making increased revenue an important part of the deal?

And I don’t just mean a return to Clinton-era tax rates. Why should 1990s taxes be considered the outer limit of revenue collection? Think about it: The long-run budget outlook has darkened, which means that some hard choices must be made. Why should those choices only involve spending cuts? Why not also push some taxes above their levels in the 1990s?

I hope the President is listening to this man. When I met David Plouffe at a book signing a couple of years ago, I mentioned Paul Krugman. David responded, “He certainly has his opinions.”

Yes, David, he does. But they’re informed opinions and the man has a Nobel Prize in ECONOMICS.

Someone at the White House, someone in Congress, PLEASE! Page Paul Krugman! We need the conscience of a liberal today, not narrow ideologies! 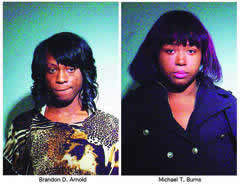 Had to write this one up.

The two dudes on the right are, well, dudes, arrested by police and charged after they allegedly threatened people with pepper spray to get them to give up their goods.

“They were both dressed as women” when they accosted two people in two separate cases Friday afternoon in the Lincoln Park neighborhood, a Cook County prosecutor said.

“They approached the victims, demanded property, and threatened [them] with Mace.”

Well, at least they looked fabulous for their close-ups — allegedly.

Shall We Deregulate the Toaster Industry?

My friends, this is my post from another publication.

Shall we deregulate the toaster industry?

Seriously, wouldn’t the toaster industry be far better off if we just let toaster manufacturing companies make toasters without having to pay the extra costs associated with government-mandated “safety” laws and guidelines? Can’t we just trust the toaster industry to make safe toasters, and, if they don’t, and a few toasters actually catch fire or explode in people’s homes, then won’t the free market eventually put those toaster manufacturers out of business?

The True Spirit of Thanksgiving (Video)

Study: Optimal Top Tax Rate For The Rich Is 70 Percent

According research by Nobel Prize-winning economist Peter Diamond and Emmanuel Saez, the optimal top income tax rate for wealthy earners is about 70 percent, far below today’s top rate of 35 percent. Diamond and Saez argue that the top tax rate should be set at the point where it maximizes revenue, which can then be used to aid lower-income Americans. They also note that “even increasing the average federal income tax rate of the top percentile to 43.5 percent, which would be sufficient to raise revenue by 3 percentage points of GDP, would still leave the after-tax income share of the top percentile more than twice as high as in 1970.” (HT: Americablog)

For how long can we afford to ignore these pesky Nobel Prize winners? You know, like Paul Krugman.

From the National Priorities Project (a wonderful site you should subscribe to):

Check out the entire page here.

What’s wrong with this picture?

Fox News Viewers Would Know More If They Read The Onion

Who are the most-informed news viewers?

No surprise: it’s not those who watch Fox.

According to the latest results from Fairleigh Dickinson University’s PublicMind Poll, some news sources make us less likely to know what’s going on in the world. In the most recent study, the poll asked New Jerseyans about current events at home and abroad, and from what sources – if any – they get their information. The conclusion: Sunday morning news shows do the most to help people learn about current events, while some outlets, especially Fox News, lead people to be even less informed than those who say they don’t watch any news at all.

Among other topics, New Jerseyans were asked about the outcome of the uprisings in North Africa and the Middle East this past year. While 53% of New Jerseyans know that Egyptians were successful in overthrowing the government of Hosni Mubarak, 21% say that the uprisings were unsuccessful, and 26% admit they don’t know. Also, 48% know that the Syrian uprising has thus far been unsuccessful, while 36% say they don’t know, and 16% say the Syrians have already toppled their government.

The best informed are those who watch Sunday morning news shows, read the New York Times or USA Today (the second surprised me), or listen to the non-profit NPR radio network.

Hats off to the informed!

And those of you watching Fox News? You’d be better off reading The Onion.

I’ve always thought of Turning Left as a dark place screaming to the light.

For what it’s worth.

Haven’t posted in a while.  With the 2012 presidential election heating up, it’s time to get back into action.

With that comes a new look with some of our old colors from our previous look.

The Weird Right is stranger than ever.