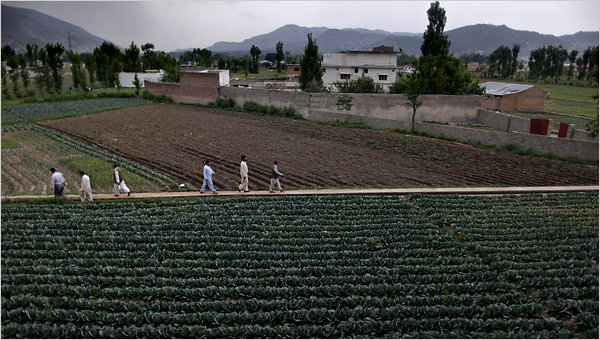 The lede for this one goes to the New York Times, from the caption used for the picture above:

Instead of going after those who helped Osama bin Laden to live in this Abbottabad compound, Pakistan arrested those who assisted in the raid that killed him.

Pakistan’s top military spy agency has arrested some of the Pakistani informants who fed information to the Central Intelligence Agency in the months leading up to the raid that led to the death of Osama bin Laden, according to American officials.

Pakistan’s detention of five C.I.A. informants, including a Pakistani Army major who officials said copied the license plates of cars visiting Bin Laden’s compound in Abbottabad, Pakistan, in the weeks before the raid, is the latest evidence of the fractured relationship between the United States and Pakistan. It comes at a time when the Obama administration is seeking Pakistan’s support in brokering an endgame in the war in neighboring Afghanistan.

At a closed briefing last week, members of the Senate Intelligence Committee asked Michael J. Morell, the deputy C.I.A. director, to rate Pakistan’s cooperation with the United States on counterterrorism operations, on a scale of 1 to 10.

“Three,” Mr. Morell replied, according to officials familiar with the exchange.

The fate of the C.I.A. informants arrested in Pakistan is unclear, but American officials said that the C.I.A. director, Leon E. Panetta, raised the issue when he travelled to Islamabad last week to meet with Pakistani military and intelligence officers.

Pakistan is no ally of the United States of America.

A black woman who applied to become superintendent of Trinity Area School District in 2009 sued that district today, alleging that she was passed over because of her race and gender.

Patrick Hefflin had three years of experience as an assistant superintendent for the Kiski Area School, and all of the necessary qualifications to run Trinity Area, in Washington, according to her complaint in U.S. District Court.

But school board member Thomas A. Bodnavich, the complaint said, told the search committee that "I don’t think that the district is ready for a black woman." The district hired Paul T. Kasunich, a white man.

If A. Bodnavich actually said, "I don’t think that the district is ready for a black woman," well, then, hello, Trinity Area SD, you were ready, and this dude steered you wrong.