Is the Southland Charter School Really a Good Thing?

District 227 must come up with the approximate $2 million annually to keep the charter school afloat.

Is this really fair to District 227? 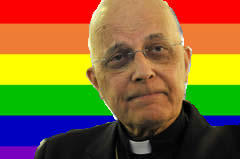 Chicago’s Cardinal Francis George easily won Turning Left’s first-annual Rainbow Flag award after comparing — and then defending his remarks regarding — the city’s gay pride parade to a rally of the Ku Klux Klan.

Honestly, what was this man thinking?

Some gay rights activists in Chicago asked the Cardinal to apologize for his remarks, calling his remarks “hurtful,” “brazen” and “bigoted.”

But George, always one to hold steadfast to his conclusions, refused.

Linking the KKK to gay rights activism led to criticism of the cardinal. On Tuesday, he issued a statement on the Archdiocese of Chicago web site defending his comments.

“The Chicago Gay Pride Parade has been organized and attended for many years without interfering with the worship of God in a Catholic church,” the cardinal’s statement said. “When the 2012 Parade organizers announced a time and route change this year, it was apparent that the Parade would interfere with divine worship in a Catholic parish on the new route.

“When the pastor’s request for reconsideration of the plans was ignored, the organizers invited an obvious comparison to other groups who have historically attempted to stifle the religious freedom of the Catholic Church. One such organization is the Ku Klux Klan which, well into the 1940’s, paraded through American cities not only to interfere with Catholic worship but also to demonstrate that Catholics stand outside of the American consensus. It is not a precedent anyone should want to emulate.”

How can the Cardinal possibly miss the fact that this really was not about him, or any “Catholic parish on the new route”?

Why would he possibly think that this change completely revolved around the Catholic Church, and the mass schedule of one parish?

Worst of all, the Cardinal lumped all parade participants in the same category with the KKK.  He did not distinguish.  The insult was to all of our GLBTQ brothers and sisters.

The change of time for the parade, believe it or not, was actually initiated to keep inebriated people from sullying the streets of Chicago. Thanks to your efforts, the parade will now launch at Noon, and the drinking will continue.

Alderman Tom Tunney (44th Ward) and organizer Richard Pfeiffer meet with church representatives last week to discuss the parish’s concerns about the route and proposed start time of 10 a.m., which is one hour before the church’s morning mass.

As Chicago’s first openly gay alderman and a member of Our Lady of Mount Carmel, Tunney was caught in the middle.

Now parade organizers say the 2012 parade will be pushed back to Noon – the previous start time – to help accommodate Sunday services along the parade route.

“After consulting with the various City departments, we believe this is an agreeable compromise to help keep the parade safe and manageable while respecting the diversity of our neighborhood,” Tunney and Pfeiffer said in a joint statement.

This is truly sad:

Ms Dias was fired in October 2010 when, at five and a half months pregnant, she approached her employer about maternity leave options.

And this is truly despicable:

The schools initially fired Ms Dias, 32, for being single and pregnant, Cincinnati.com reports.

When the schools discovered that violated several federal and state anti-discrimination laws, they said she was fired because she became pregnant using artificial insemination.

How sad for him.

How saw for Catholics everywhere. From the Houston Chronicle’s campaign blog:

Texas Monthly has announced its Bum Steer of the Year, an annual “award” granted to the person the magazine deems “has been responsible for the biggest screw-up, gaffe, fumble, stumble, train wreck, or humiliation of the past twelve months.”

And this year it goes to Rick Perry.

Can you believe this?

If there were any doubts that Fox’s reign of offense extended beyond English speaking borders, may they now be laid to rest.

Who Do You Think Is Responsible For The Death of Christ?

Political leaders should be encouraging young adults to participate in civic life, but many Republican state lawmakers are doing everything they can instead to prevent students from voting in the 2012 presidential election. Some have openly acknowledged doing so because students tend to be liberal.

William O’Brien, the speaker of the New Hampshire State House, told a Tea Party group earlier this year that students are “foolish” and tend to “vote their feelings” because they lack life experience. “Voting as a liberal,” he said, “that’s what kids do.” And that’s why, he said, he supported measures to prohibit students from voting from their college addresses and to end same-day registration. New Hampshire Republicans even tried to pass a bill that would have kept students who previously lived elsewhere from voting in the state; fortunately, the measure failed, as did the others Mr. O’Brien favored.

The growth of income inequality has tracked very closely with measures of political polarization, which has been gauged using the average difference between the liberal/conservative scores for Republican and Democratic members of the House.

“The proximity of these trends is uncanny,” according to a 2003 paper by researchers Nolan McCarty, Keith T. Poole and Howard Rosenthal. “Remarkably, the trends of economic inequality and elite political polarization have moved almost in tandem for the past half-century.”

Excellent commentary on this from Eric Byler at Coffee Party USA.

Man Allegedly Tries To Kill Wife Over Excessive Facebook Use

A southwestern Pennsylvania man has been jailed on attempted homicide and other charges accusing him of trying to shoot his wife because he believes she spends too much time on the Facebook social networking site.

Ron Paul says he “wouldn’t be happy” with support from the white supremacists, survivalists and anti-Zionists who have rallied to his support, but he will not disavow their support, saying, “They’re endorsing what I do or say — it has nothing to do with endorsing what they say.”

So Ron Paul will accept support from Neo-Nazis. He simply won’t endorse anthing they say, except, of course, that, for whatever reason, they support Ron Paul.

The American Free Press, which markets books such as “The Invention of the Jewish People” and “March of the Titans: A History of the White Race,” is urging its subscribers to help it send hundreds of copies of Ron Paul’s collected speeches to voters in New Hampshire. The book, it promises, will “Help Dr. Ron Paul Win the GOP Nomination in 2012!”

Don Black, the director of the white nationalist website Stormfront, said in an interview that dozens of his members were volunteering for Mr. Paul’s campaign, and a site forum titled “Why is Ron Paul such a favorite here?” has no fewer than 24 pages of comments.

“I understand he wins many fans because his monetary policy would hurt Jews,” read one. Far right groups like the Militia of Montana say they are rooting for him as a stalwart against government tyranny.

Are you perhaps to blame for Newt "The Buck Stops There" Gingrich's latest electoral problems?

Remember, if Newt Gingrich has a problem, someone else is to blame.

Remember that. The man who has already christened himself the GOP nominee for President of the United States commits no errors. He is infallible.

Case in point: Newt blames the State of Virginia for his failure to qualify for his home state’s primary ballot.

Newt Gingrich, one of the leading US Republican presidential candidates, has said Virginia’s electoral system is flawed, after failing to qualify for the primary ballot in his home state.

Virginia party officials say he did not submit the required 10,000 signatures to appear on the 6 March ballot.

Mr Gingrich’s team vowed to pursue an “aggressive write-in campaign” – although Virginia does not permit this.

Can you imagine this man as president? Newt “The Buck Stops There” Gingrich, man of a thousand excuses.

Newt, dude, you only had to get 10,000 good signatures.  Your campaign only submitted 11,050. Even local candidates here who only need two or three hundred signatures submit at least double the required number.

Was it really that difficult to find 10,000 good signatures in the entire state of Virginia? Or didn’t you really try?