What is a Democrat? How do we come in from The Wilderness?

If you haven’t yet listened to Jon Favreau’s documentary podcast The Wilderness, it’s time. The content is engaging, fascinating, and inspirational. Most of all, it explores the question, “What is a Democrat?” Who are we? How did we get here, with Donald Trump as President of the United States, a minority voice in Congress, a minority of Democratic governors, so many Republicans elected at the state and local levels? Yet, Democrats far outnumber Republicans in this country.

Who are we? Where are we? Why aren’t we voting? What do we stand for?

The podcast is excellent. 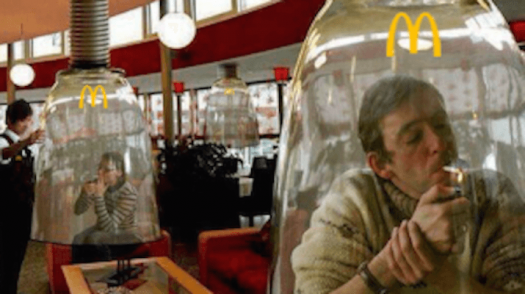 Looking like the Cone of Silence from Get Smart, two McDonald’s in Colorado have implemented marijuana smoking sections. Thirteen other McDonald’s in the state are working to follow suit.

Colorado continues to blaze major trails when it comes to marijuana.

The first ever marijuana smoking sections will be implemented in 15 of the state’s McDonald’s restaurants. They will use the existing Play Place area’s and convert them over to friendly marijuana smoke zones.

Called “smoking pods”, these area’s will allow joints, bongs and pipes to be smoked, but only marijuana is allowed, not tobacco products or cigarettes.

Watch the second part of the video for the science.

So it turns out cheaters will not win this year, at least one in particular from H-F.

I especially feel bad for the kids affected, and, again, for those who were honest from the get-go.

From Joe Biesk at the Sun-Times:

Homewood-Flossmoor’s girls basketball team was scheduled to play T.F. North Wednesday. Instead, the Illinois High School Association has disqualified the team from the state playoffs over bylaw violations.

The Homewood-Flossmoor girls basketball team and its acclaimed first-year coach Anthony Smith were top contenders for the state title this season. Now, they won’t even play a game in the tournament. In a decision Wednesday, issued about an hour before H-F was to play its opening game in the tourney, the Illinois High School Association dashed all hopes of the team’s postseason glory. Citing several violations of its bylaws, the IHSA banned H-F from competing and forfeited its 21 victories this season. The Vikings, ranked No. 1 by the Sun-Times, was scheduled to play T.F. North at 6 p.m. in Calumet City.

Just hours before the top-ranked Homewood-Flossmoor girls basketball team was to take the floor to begin its playoff march, the state high school athletic association delivered a bombshell Wednesday, suspending the entire team and its highly regarded coach for rules violations.

The sanctions by the Illinois High School Association come just weeks after a lawsuit rocked the highly touted program, accusing coach Anthony Smith of improperly recruiting star players from other school districts in his first season at H-F. That prompted the school district to conduct an internal investigation that led it to acknowledge it had violated rules, though none for improper recruiting.

More here at the Trib

Which makes Dale Hansen’s address Monday night all the more remarkable. The Dallas sports anchor for ABC local affiliate WFAA took a break from the standard script to address the issue of Michael Sam, a defensive lineman poised to become the first openly gay player in the NFL.

Palestine: A Land Forgotten; Isreal: The One Forgetting

How much thought have you given Palestine recently?

And we thrive to news of celebrity arrests, as if they matter one damn.

Had lunch with a now old friend, my friend is very young (comparable to my scalp line), but very, very wise.

My friend just returned from a half-month trip to Israel and Palestine (notice I’m naming them separately, as the two separate states the are, should be, shall be, Insha’Allah.

God willing, that is.

I will share with you in this space some of the amazing, alarming, and jaw-dropping things I learned from my friend today.

Israel, the state (not all Israelis, not all Jews), but Israel is persecuting the Palestinians.

And this must be stopped.

Did you know, for example, that Israel controls all water and electricity into Palestinian regions?

And, did you know, that Israel frequentlly cuts off all water and electricity if one Palestinian “misbehaves?”

Did you know that Israel will not do trash pick-up in any region inhabited by Muslims, whether in the Old City, or Palestine?

Did you know that the Israeli government then uses that reality to refer to the Palestinians as filthy, dirty animals?

In short, did you know that Israel, to put it mildly, discriminates against the Palestinians, that the officials of the Israeli state refer to all Palestinians as “terrorists.”

Did you know that, at the Dome of the Rock, Israeli soldiers guard the entrance, allowing only a certain number of Muslims to enter each day to pray?

And did you know that Palestinians just want to live?

To build homes (which is illegal now)?

Thank you to my friend.

For educational purposes only.