Paramedics responded to the call at 2:41 p.m. at the Kahala Hotel and Resort, Honolulu television station KITV reported.

Paramedics treated him and took him to Queen’s Medical Center where he is in serious condition. Queens spokeswoman N. Makana Shook said the hospital is unable to comment on the report. Anastasia Kelly, AIG’s vice chair, is quitting because of the $500,000 pay cap. She talked with Rep. Dennsi Kucinich at a May 2009 hearing as then AIG CEO Edward Liddy watched. I would have loved to hear what Kucinich had to say to her.

They weren’t kidding in the case of Anastasia Kelly at AIG. The AIG vice chair has informed her employer that she’s out of there because of the pay caps.

NPR’s Tim Robbins reported for the network’s newscast, "The company says she is leaving for what it calls "good reason", then states that reason as the pay cap. Kelly will get a reported $3.8-million severance package."

Good riddance to her.

Need to Enter America Illegally? There’s an App for That!

The Transborder Immigrant Tool would help migrants find water in the deserts near the border and otherwise avoid getting lost in their treacherous trek north.

The Associated Press says the phone would be programmed to show where water stations are located and how far away they are.

"It’s about giving water to somebody who’s dying in the desert of dehydration," said Micha Cardenas, 32, a UCSD lecturer.

More from the Associated Press:

The effort is being done on the government’s dime — an irony not lost on the designers whose salaries are paid by the state of California.

"There are many, many areas in which every American would say I don’t like the way my tax dollars are being spent. Our answer to that is an in-your-face, so what?" says UCSD lecturer Brett Stalbaum, 33, a self-described news junkie who likens his role to chief technology officer.

Migrants walk for days in extreme heat, often eating tuna and crackers handed out at migrant shelters inMexico. On Arizona ranches, they sip desperately from bins used by cows when their water runs out.

Hundreds have perished each year since heightened U.S. border enforcement pushed migrants out of large cities like San Diego and El Paso, Texas, in the 1990s. In response, migrant sympathizers put jugs or even barrels of water in the desert.

The designers want to load inexpensive phones with GPS software that takes signals from satellite, independent of phone networks. Pressing a menu button displays water stations, with the distance to each. A user selects one and follows an arrow on the screen.

Some worry the software could lead migrants to damaged or abandoned water stations. Others wonder if it would lull them into a false sense of security or alert the Border Patrol and anti-illegal immigration activists to their whereabouts.

John Hunter, who has planted water barrels in California’s scorching Imperial Valley since the late 1990s, says vandals destroy about 40 of his 150 stations every year.

"My concern is for people who arrive and find (the water) doesn’t exist," he says.

Karl Rove, an outspoken defender of traditional marriage and opponent of same-sex marriage, has been granted a divorce of his wife of 24 years.

According to Politico.com, the man famously referred to as "Bush’s Brain" for his stewardship of President George W. Bush’s successful White House bids, has divorced his wife of 24 years.

Karl Rove, former senior adviser and deputy chief of staff to President George W. Bush, was granted a divorce from his wife, Darby, in Texas according to family spokesperson Dana Perino, herself a former Bush White House staffer.

“Karl Rove and his wife, Darby, were granted a divorce last week," Politico quotes Perino as saying. "The couple came to the decision mutually and amicably, and they maintain a close relationship and a strong friendship. There will be no further comment, and the family requests that its privacy be respected.”

But, Karl, we’re just getting started with you.

Suspect Shot by Police on Chicago’s South Side

Police and fire crews remain at the scene of a police-involved shooting Tuesday night in the South Side Fuller Park neighborhood.

Independent Police Review Authority spokesman Curtis Tarver confirmed a police-involved shooting happened at 54th and Indiana Avenue about 7:40 p.m. He said a suspect was shot by a police officer.

Fire crews remained at the scene in the 7800 block of South Shore Drive at 9 p.m., according to Fire Media Affairs Cmdr. Will Knight, who said no transports had been made.

This is a developing story.

Read more here at the Sun-Times. 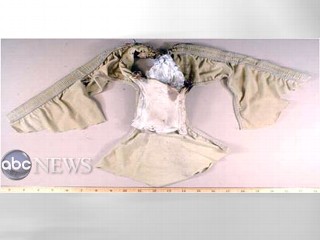 Thanks to the Associated Press, you can now see that guy’s underwear.

A singed pair of underwear with a packet of powder sewn into the crotch, seen in government photos obtained exclusively by ABC News, is all that remains of al Qaeda’s attempt to down an American passenger plane over Detroit.

As seen in these photos, the alleged bomb consisted of a packet of powder sewn into the briefs of Umar Farouk Abdulmutallab, a 23-year-old Nigerian. Al Qaeda took credit Monday for the attempted bombing, boasted of its ability to overcome U.S. intelligence and airport security, and promised new attacks.

The first photo, to the left, shows the slightly charred and singed underpants with the bomb packet still in place. All photos include a ruler to provide scale.

Now you have seen an alleged terrorist’s underwear. No alleged skid marks.

Is Orly Taitz Issuing Call to Arms Against President Obama?

Is birther Orly Taitz calling for a call to arms against President Obama?

Taitz has long ago pulled the fabricated Barack Obama birth certificate she once posted on her website. Her anger knows no bounds, however.

What is the real intention of this Kenyan, Indonesian communist usurper? Is it to provide security for us or to destroy our security? Judge for yourself.

Seeing targeted destruction of our economy, our security, dissipation of American jobs, massive corruption in the Government, Congress Department of Justice and Judiciary, it might be time to start rallies and protests using our second amendment right to bare arms and organise in militias.

"Kenyan, Indonesian communist usurper?" Really, Orly? And what exactly is meant by "protests using our second amendment right to bare arms and organise in militias?" Is Taitz calling for armed attacks against the President of the United States?

Taitz might indeed wish this was Kenya, which has had its share of armed military coups. Of course, in parts of Kenya, they burn witches.

This, however, is the United States of America, and Taitz has had a very, very bad year.

Here’s the last play from the NFL Game Center:

I don’t know where this team has been for most of the season, but they were incredible tonight. Jay Cutler played the game of his career, and even looked a bit choked up when it all finally ended.

I got choked up too.

For the first time this season, the Bears had a balanced and potent offense with Jay Cutler leading the way in a 36-30 overtime upset of the Minnesota Vikings.

Cutler hit Devin Aromashodu on a 39-yard touchdown pass in overtime to give the Bears the victory and raise their record to 6-9 going into the season finale Sunday at Detroit. Aromashodu had seven catches for a career-high 150 yards on the night.

The winning score was set up when Bears linebacker stripped the ball from Vikings running back Adrian Peterson and the Bears recovered on the Minnesota 39.

The Bears had taken a 30-23 lead with 4:55 to play in regulation on a Cutler-to-Earl Bennett 20-yard touchdown pass, only to see Brett Favre march the Vikings back for a game-tying, six-yard

TD pass on fourth-and-goal to Sidney Rice with 16 seconds  remaining in regulation.

The Bears received the kickoff to open the overtime period and moved into field-goal range, but Robbie Gould missed a 45-yard attempt wide right.

Entering the game, the Vikings appeared to be unraveling at the worst possible time,having lost three of their last four. And the Bears took it to them when the only thing they had to play for was pride and the chance to leave a late impression on the decision-makers.

Frankly, Cutler played an awesome game, completing 20 of 35 for 273 yards, 4 touchtowns and 1 interception. Brett Favre completed 26 of 40 for 321 yards, 2 touchdowns and no interceptions. Bears Wide Receiver Devin Aromashodu had 7 receptions for 150 yards, including the end-of-game winning touchdown.

Read more from the Tribune.

I’m sorry, this is just too funny.

Andy Martin, challenging Mark Kirk in the Republican U.S. Senate primary in Illinois, wants you to know about a rumor he’s heard about Mark Kirk from some other guy who claims to know lots.

U.S. Rep. Mark Kirk, the front-runner in the Republican primary election for U.S. Senate, finds himself the object of an unusual attack ad from one of his lesser-known opponents.

Andy Martin, once known as Anthony Martin-Trigona, who has run for numerous elective offices over the last three decades in Illinois, Florida and Connecticut, taped a commercial saying Kirk is gay.

Martin’s source? Statements some conservative Republicans made on a radio show saying they have heard “rumors” that Kirk is gay.

Kirk, a U.S. Naval Intelligence officer, was unavailable for comment because he is on active duty over the holidays, said spokesman Eric Elk.

But Elk issued this statement on his behalf: “The ad is not true and is degrading to the political process. The people of Illinois deserve better.”

Just in case you were ever tempted to take Republicans seriously again, read all that garbage up there again. Ask yourself, why does this accusation mean anything to Republicans? Then, ask yourself why Mark Kirk didn’t make some statement, at least to say, “No, I’m not. Not that there’s anything wrong with that!”

The only response from that comes from  the campaign is an assurance that the ad is not true. If Kirk wants to garner any gay GOP voters, he’s got to do better than than.  The fact that a better response is so far an afterthought says more than any future response would.

As for Andy Martin? For some reason, I feel I must quote another queen, Shakespeare’s Queen Gertrude, ” The lady doth protest too much, methinks.”

Electronics Sales and Thefts Up This Year; Watch Your Stuff on CTA

Reports leading up to the holiday season indicated sales of electronics were up this year. While not meeting 2010 targets due to the G.O.P./Bush Recession, manufacturers still expected to do well.

Thieves are also looking for your gadgets, so be careful.

Lindsey Anderson had a strange feeling when a man boarded and sat down in front of her on the CTA’s Green Line near the Harlem station earlier this month.

Sure enough, Anderson said the man reached toward her in a swift motion and tried to take her high-end cell phone. But she kept a tight grip on her Motorola Droid, and the man eventually ran off.

The would-be thief left Anderson with some soreness, but also her phone. Other commuters haven’t been as lucky. Chicago police say crooks spy the tiny white ear buds that often signal an iPhone and use the frequent stops of an “L” train to get away with a quick score.

I visited several mobile phone centers today, and they were packed. I didn’t purchase anything new — just shopping around — but these places were booming. Compare that with Macy’s, which was all but empty. Would-be thieves hope to sell your favorite gadget on the streets.

And Macy’s is way over-rated.