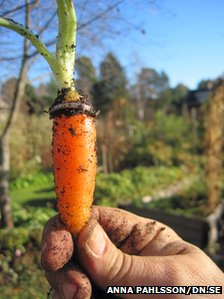 A Swedish woman has discovered her wedding ring on a carrot growing in her garden, 16 years after she lost it, says a newspaper.

Lena Paahlsson had long ago lost hope of finding the ring, which she designed herself, reports Dagens Nyheter.

The white-gold band, set with seven small diamonds, went missing in her kitchen in 1995, she told the paper.

Although the ring no longer fits, she hopes to have it enlarged so she can wear it again.