Greenspan Turns Left: Calls for Repeal of All the Bush Tax Cuts 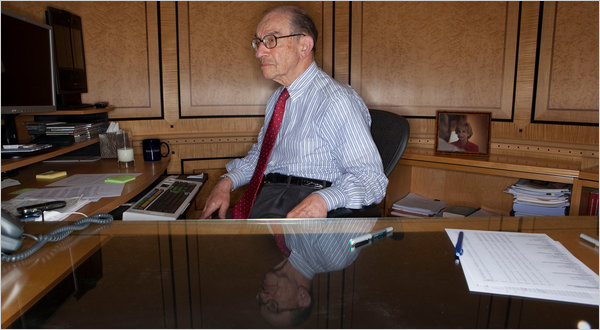 Former Federal Reserve chairman Alan Greenspan has officially moved to the left of President Obama on taxes. And that’s something, coming from a self-described lifelong Republican libertarian.

It was not enough, it seems, for Alan Greenspan, the former Federal Reserve chairman and a self-described lifelong Republican libertarian, to call for stringent government regulation of giant banks, as he did a few months ago.

Now Mr. Greenspan is wading into the most fierce economic policy debate in Washington — what to do with the tax cuts adopted, in large part because of his implicit backing, under President George W. Bush — with a position not only contrary to Republican orthodoxy, but decidedly to the left of President Obama.

Rather than keeping tax rates steady for all but the wealthiest Americans, as the White House wants, Mr. Greenspan is calling for the complete repeal of the 2001 and 2003 tax cuts, brushing aside the arguments of Republicans and even a few Democrats that doing so could threaten the already shaky economic recovery.

“I’m in favor of tax cuts, but not with borrowed money,” Mr. Greenspan, 84, said Friday in a telephone interview. “Our choices right now are not between good and better; they’re between bad and worse. The problem we now face is the most extraordinary financial crisis that I have ever seen or read about.”

Mr. Greenspan, who led the Fed for 18 years until he retired in 2006, warns that without drastic action to increase federal revenue and reduce the long-term growth in health care costs, bond investors could make a run on Treasury securities, driving up the nation’s borrowing costs and leading to another global economic crisis. This is not the first time Mr. Greenspan has urged fiscal restraint; he warned in 2008 that the country could not afford the tax cuts proposed by Senator John McCain, the Republican presidential candidate. But his sweeping call for rescinding the Bush tax cuts, which he has articulated in a recent appearance on “Meet the Press” and an interview with The Financial Times, among other settings, has rankled former colleagues.

I never understood Trickle-Down Economics. Cutting government revenue never results in economic growth. Instead, the richest of the rich buy bigger yachts, and the national debt increases, often exponentially. Republicans never had the discipline to cut spending. Democrats fund projects that offend the G.O.P. and libertarians, but also balance budgets, repairing damage done by the G.O.P.

I’m with Harry Truman and Bill Clinton: "If you want to live like a Republican, VOTE FOR DEMOCRATS."