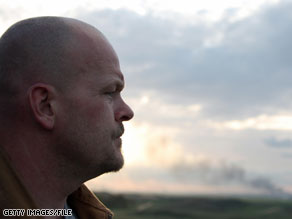 "John McCain is no public servant," Wurzelbacher said at a campaign rally Saturday in Pennsylvania for long shot gubernatorial candidate Sam Rohrer. Later, in an interview with Pennsylvania Public Radio, he dismissed the suggestion that he owes his fame to McCain.

"McCain was trying to use me," he said. "I happened to be the face of middle Americans. It was a ploy."

Wurzelbacher is apparently finished with Sarah Palin as well since she is backing John McCain’s re-election bid in Arizona.

Apparently the Democrats aren’t the only ones turning on each other. The G.O.P. circular firing squad is in place.

Perhaps Wurzelbacher is trying to put together his own reactionary, right-wing, ultra-Libertarian campaign for some office somewhere? What party would have him?