New York Times columnist Frank Rich makes it clear in today’s column that Sarah Palin has not set a trap for liberals all over the world when she wrote crib notes on the palm of her hand last week to carry her through speeches and interviews at a Tea Party convention. Calling Palin "nothing if not cunning," Rich first asks us to consider if Palin, by playing stupid, is actually engaged in a brilliant scheme to cement "her cred with the third of the country that is her base. Her hand hieroglyphics may not have been speaking aids but bait."

Is Sarah Palin a brilliant, master baiter? Not at all.

More from Frank Rich, who is almost even-handed in his criticisms of Repbulicans and Democrats, for now, at least, beginning with a poke at President Obama:

Instead of praising bailed-out bankers, the president might have more profitably instructed his press secretary to drop the lame Palin jokes and dismantle the disinformation campaign her speech delivered to a national audience. Palin, unlike Obama, put herself on the side of the angels, railing against Wall Street’s bonuses and bailout, even though she and John McCain had supported TARP during the campaign. Palin also bragged that she had “joined with other conservative governors” in “rejecting some” stimulus dollars when in reality she rejected only a symbolic 3 percent of those dollars — soon to be overruled by the Alaskan Legislature, which took every last buck.

This disingenuousness is old hat for Palin, who hired lobbyists to pursue $27 million in earmarks while serving as mayor of the town of Wasilla (pop. 6,700) and loudly defended her state’s “bridge to nowhere” until her politically opportunistic flip-flop. What’s new is the extent to which her test-marketed dishonesty has now become the template for her peers in the G.O.P. “populist” putsch. Adopting her example — while unencumbered by her political baggage — the party is exploiting the Tea Party movement to rebrand itself as un-Washington while quietly conducting business as usual in the capital.

There’s “no difference” between G.O.P. and Tea Party beliefs, claims the House Republican leader, John Boehner. Not exactly. The three senators named “porkers of the month” for December by the nonpartisan Citizens Against Government Waste were all Republicans: Richard Shelby of Alabama, Susan Collins of Maine and Thad Cochran of Mississippi. Shelby is so unashamedly addicted to earmarks that he used a senatorial “hold” to halt confirmation votes on 70 Obama administration appointees until his costly shopping list of Alabama pork projects was granted. Or so he did until his over-the-top theatrics earned him unwelcome attention and threatened to derail his party’s pious antispending posturing.

While more brazen than his peers, Shelby is otherwise typical of them. Jonathan Karl of ABC News last week unearthed photographs of various G.O.P. congressmen posing in their districts with stimulus checks that they had publicly opposed. The Washington Times uncovered more than a dozen other Republican lawmakers who privately solicited stimulus money from the Department of Agriculture while denouncing the stimulus to their constituents and the news media, often angrily.

Even the G.O.P./Tea Party heartthrob of the hour, Scott Brown, is not the barn-coat-wearing populist he purports to be. In her speech, Palin saluted him as “just a guy with a truck” who was doing “his part to put our government back on the side of the people.” In reality Brown’s Massachusetts Senate campaign benefited from a last-minute flood of contributions from financial industry donors — with 80 percent of the haul coming from outside the state. It says all you need to know about our politics that his Democratic opponent, Martha Coakley, matched him by holding a fund-raiser largely sponsored by lobbyists for the health care and pharmaceutical industries.

According to Rich, Palin’s only substantive suggestion last week was that we should seek "divine intervention" to help us face our problems:

So it went with Palin last weekend. Her only concrete program for dealing with America’s pressing problems came in the question-and-answer session. “It would be wise of us to start seeking some divine intervention again in this country,” she said, “so that we can be safe and secure and prosperous again.” That pretty much sums up her party’s economic program, at least: divine intervention will achieve what government intervention cannot. That the G.O.P. may actually be winning this argument is less an indictment of Palin than of Washington Democrats too busy reading the writing on her hand to see or respond to the ominous political writing on the wall.

And here I am, once again, blogging about Sarah Palin, the GOP’s Talk-Head-In-Chief. 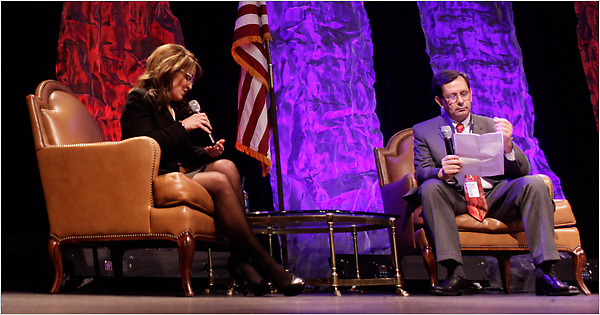