According to IMDb, Davad Carradine’s death was accidental, brought about by autoerotic asphyxiation:

He was discovered by a maid, naked and hanged, but the suggestions his death had a sexual twist were strongly disputed by the star’s close friend, attorney Vicki Roberts, and his manager Chuck Binder, who insisted he died of natural causes.

But a statement from Carradine’s representative now indicates the actor died during a sex act.

The spokesperson tells TMZ.com, “We can confirm 100 per cent that he never would have committed suicide. It was an accidental death. Everybody is in shock.”

Rumours Carradine died attempting auto-erotic asphyxiation – where victims achieve heightened sexual pleasure by restricting their air supply – are backed up by a quote a Bangkok police officer gave to British newspaper The Sun.

The cop tells reporters, “A rope was attached to his neck and also to his penis”.

Well, there’s an image to carry with you.

I prefer this one: 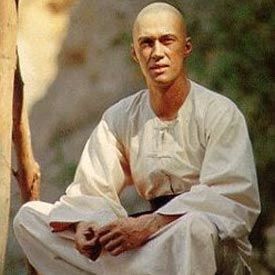