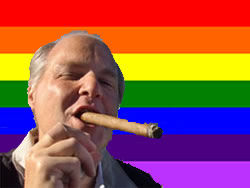 Even before President Barack Obama (love the sound of that) took office, Limbaugh was hoping for his failure.  According to Faiz Shakir at Think Progress, last Friday, Limbaugh told his radio audience, ““I disagree fervently with the people on our [Republican] side of the aisle who have caved and who say, ‘Well, I hope he succeeds.’”

According to Shakir, Limbaugh said he was asked by a “major American print publication” to offer a 400-word statement explaining his “hope for the Obama presidency.”  His response?

So I’m thinking of replying to the guy, “Okay, I’ll send you a response, but I don’t need 400 words, I need four: I hope he fails.” (interruption) What are you laughing at? See, here’s the point. Everybody thinks it’s outrageous to say. Look, even my staff, “Oh, you can’t do that.” Why not? Why is it any different, what’s new, what is unfair about my saying I hope liberalism fails? Liberalism is our problem. Liberalism is what’s gotten us dangerously close to the precipice here. Why do I want more of it? I don’t care what the Drive-By story is. I would be honored if the Drive-By Media headlined me all day long: “Limbaugh: I Hope Obama Fails.” Somebody’s gotta say it.

Really, Rush?  As bad as things are now, you want the president to fail?

If this president fails, America fails.  There is no other alternative.  The country is in an almost unprecedented financial crisis, inches away from another Depression.  The only people not suffering are the filthy rich who lack empathy, like Limbaugh.

There aren’t enough pain pills in the world for them, Rush, even if you donate some of your stash.

The majority of Americans get it — the time for screaming matches is over.  Limbaugh’s audience will fade.  People will see him for what he is: a comedian in search of an audience.  Barack Obama is not the polarizing figure Bill Clinton was at times.  President Obama is an honest, likeable guy.And he’s honest.

It’s going to be tough being Rush the next four years.  And it’s about time.