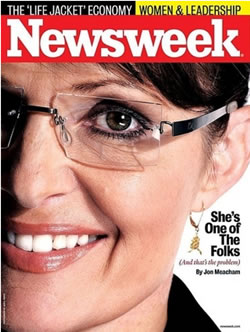 Will this be the beginning of the end of Sarah Palin’s close-up, or will the voters ignore her ethics violations?

First, it is very difficult to prosecute ethics violations, especially where there was no direct monetary gain procured by the offending party.  Voters, on the other hand, should read between the lines.  What Gov. Palin did was wrong – ethically, legally, and morally.  Whether she ever faces prosecution or censure for her actions is irrelevant.  The governor of the state of Alaska used her influence in a radically inappropriate manner to give her former brother-in-law the boot.

That says it all.

Gov. Sarah Palin abused the powers of her office by pressuring subordinates to try to get her former brother-in-law, a state trooper, fired, an investigation by the Alaska Legislature has concluded. The inquiry found, however, that she was within her right to dismiss her public safety commissioner, Walt Monegan, who was the trooper’s boss.

A 263-page report released Friday by lawmakers in Alaska found that Ms. Palin, the Republican vice-presidential nominee, had herself exerted pressure to get Trooper Michael Wooten dismissed, as well as allowed her husband and subordinates to press for his firing, largely as a result of his temperament and past disciplinary problems.

“Such impermissible and repeated contacts,” the report states, “create conflicts of interests for subordinate employees who must choose to either please a superior or run the risk of facing that superior’s displeasure and the possible consequences of that displeasure.” The report concludes that the action was a violation of the Alaska Executive Branch Ethics Act.

But the truth is, Republicans have allowed their party to be raped by the extreme right, and that’s a shame.  Was it a shameful lust for power that led the “Party of Lincoln” to slide so wickedly to the right?  Was it an utter disregard for consequences that caused them to look the other way while their president took the nation on an insane and reckless spending spree while slashing the country’s income?

What was it that caused Republicans to look the other way?  How are their stock portoflios now?

Here’s the thing:  Now everyone, whether Republican or Democrat or Independent, is suffering.

Read between the lines:  It’s gotta be Obama.