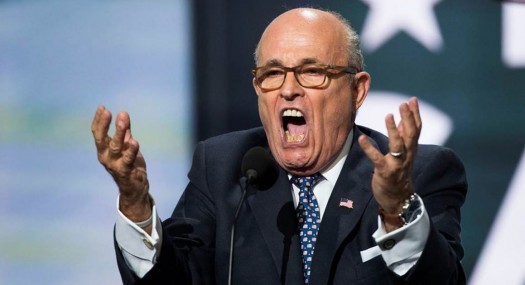 The Mayor of 9/11 forgot about all that, apparently. Or maybe he’s engaging in historical revisionism.

Former New York Mayor Rudy Giuliani set off a tempest about terrorism Friday with his claim that this nation "had no domestic attacks" under President George W. Bush.

Giuliani somehow neglected to mention the Sept. 11, 2001, terrorist attacks as he was contrasting President Barack Obama’s handling of terrorism with that of Bush in light of the failed Christmas Day attempt to blow up a Detroit-bound flight. The Sept. 11 attacks toppled New York’s World Trade Center, killed nearly 3,000 people in New York, Washington and Pennsylvania and earned Giuliani accolades as "America’s mayor."

The Republican said of Obama on ABC’s "Good Morning America" that "what he should be doing is following the right things that Bush did."

While saying he believes Obama "turned the corner" on understanding the nature of terrorism when he publicly declared the U.S. at war, Giuliani added that Obama has plenty of room to improve on terrorism.

"We had no domestic attacks under Bush," Giuliani said. "We’ve had one under Obama."

While I appreciated the analysis of Giuliani’s remarks on MSNBC’s Countdown with Keith Olbermann, Rachel Maddow really did it all justice. Enjoy the video above.