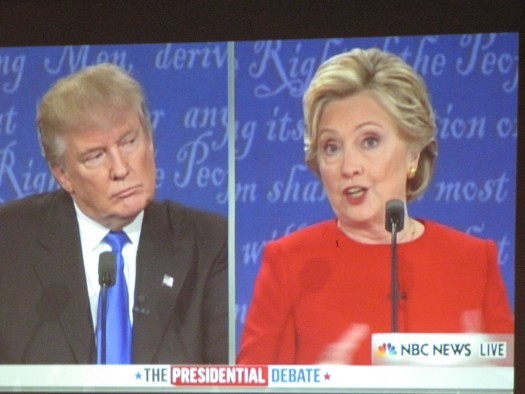 And, it’s over. Handshakes.

Says he was going to say something terrible about Hillary and her family, but decided not to.

Trump said Clinton does not have a presidential look, Holt said. She’s the first female nominee of a major party.

As soon as he visits 128 countries or spends 11 hours testifying before a congressional committee, “then he can talk about stamina.

Trump wanders again. “We are losing billions and billions of dollars.”

“Our word is good,” she reassures.

Says Trump never said what his alternative would be to deal with Iran.

Holt: Do you support the current U.S. policy on first use [of nuclear weapons].

Trump: Saudi Arabia and others should be paying us money.

Clinton speaks of Iran. Sanctions were not enough.

“A man who can be provoked by a Tweet should not have his hand anywhere near the nuclear codes.”

Trump says that he has much better judgment than Hillary Clinton.

“I think my strongest asset, maybe by far, is my temperament.”

Trump: ISIS formed because of a vacuum formed  by Barack Obama and Secretary Clinton.

Trump: “NATO could be obsolete.” Says NATO does not focus on terror.

Hillary speaks of cooperating with Muslims in America, not alienate Muslims and push them away like Trump has done.

Clinton: George W. Bush made the agreement to leave Iraq. The only way we could have stayed would have been to have an agreement with the then-Iraqi government to protect American troops. That did not happen.

Trump: “Had we taken the oil,” there would be no ISIS.

Holt: “How will you prevent home-grown terrorism?”

Clinton: “I have put forth a plan to defeat ISIS.” It does entail going after them online. We must also intensify air attacks against ISIS. Take out their “claim of being a caliphate.”

This would be awesome.

Trump talks about his endorsements.

Clinton: We are not going to sit idly by and let state actors go after public and private information.

“I was so shocked when Donald invited Putin to hack into Americans.”

Hillary Clinton speaks on cyber security. There are independent hackers. There also cyber attacks coming from states. “The most recent and troubling of them has been Russia.”

“As far as the lawsuit,” admits he was sued, “we settled with no admission of guilt.”

That just means cash flowed and the other side was silenced.

Clinton: [Trump] has started his race for president on this racist, birther lie.

Clinton: Trump was sued in 1973 because he would not rent to African Americans. “He actually was sued twice by the justice department.”

“I think Donald just criticized me for preparing for this debate. I did. You know what else I did? I’m preparing to be president.”

Hillary: Crime has continued to drop under the current mayor. We have to work with faith communities

Clinton speaking of “implicit bias,” which is a problem for all of us, she says. Police now are having to handle a great deal of mental health problems on the street.

“We’ve got to address the systemic racism in our justice system. We can’t just say ‘law and order.'”

Clinton is glad the federal government is ending private prisons. “I want to end them in the state systems.”

“Stop and frisk was found to be unconstitutional,” Hillary says.

Trump bemoans Chicago, “I have property there.”

Holt: “Stop and frisk has been ruled unconstitutional.”

Trump: “No, you’re wrong.” Blames the judge and current mayor.

Trump, “African Americans live in Hell.” Calls for bringing back “stop and frisk.”

Trump: “We need law and order. When I look at Charlotte, NC, a city where I have investments.”

Holt turns to the question of race. “Everyone should be respected by the law,” Clinton says. “And everyone should respect the law.”

Clinton: “We have to tackle the plague of gun violence.”

No focus. Clinton and Trump go back and forth. Lester Holt again tries to take the reigns.

Regarding people who did not get paid, “I took advantage of the laws of the country.”

Hillary speaks of people she’s met who were “stiffed” by Donald Trump.

Trump does not deny the accusation from Clinton, “Maybe he didn’t do a good job and didn’t deserve to be paid.”

“As far as my tax returns, you don’t learn much from tax returns. You learn from financial disclosures,” Trump said.

“Were he ever to get near the White House, what would the conflicts be?”

Clinton, “For 40 years, or 39, everyone running for president has released their tax returns.”

Lester Holt to Trump: “You have not released your tax returns.”

“I’m under a routine audit and I will release them” as soon as the audit is over.

Dancing away from the question, now talking about a trade deficit.

Holt presses Trump on his taxes. Trump says he gets audited often by the IRS.

Trump goes after Clinton again. “We are in a big, fat, ugly bubble.”

Lester Holt has lost control of the debate. Clinton speaks of the “Trump loophole,” “Trumped up trickle down” economics.

The moderator, Lester Holt has already lost control of the debate.

Hillary is keeping her cool. Donald Trump is speaking to Hillary.