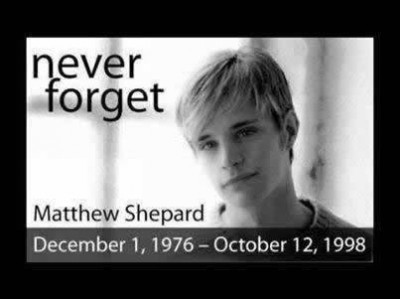 Between the reality, above, and the madness, below, lie two simple truths: Matthew Shepard was viciously beaten, eventually dying on October 12, 1998.

Here is what she said on October 11, one day before the anniversary of Matthew’s painful death:

At today’s conservative Values Voters Summit, hosted by the certified anti-gay hate group Family Research Council, Sandy Rios made the horrific claim that the story of the 1998 anti-gay hate-crime murder of Matthew Shepard “wasn’t true,” and is “a total fraud,” and a “fairy tale” used as “propaganda” by LGBT activists.

If you can tolerate her unabashed lies, below is video of her comments, spoken, horribly, on the eve of the fifteenth anniversary of Shepard’s death.

He was attacked overnight on October 6–7, and taken off life support and died on October 12, 1998.

Sandy Rios’ claims are cruel, rubbing salt in wounds that will never heal.

Our condolences to the Shepard family for being put through these awful, hate-filled claims, all over again.