I Want My Next Car To Be A Chevy Volt

I Want My Next Car To Be A Chevy VoltAugust 15, 2010 TL
BusinessEnvironmentGlobal Warming
0 Comment 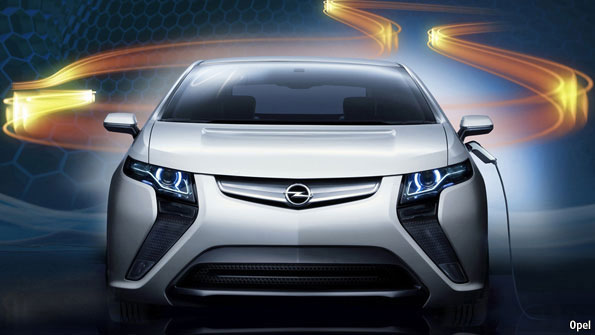 I want a Chevy Volt. For my next car.

The Economist took the Volt for a spin, and the review sounds promising:

So how does the Volt/Ampera drive? Overall, pretty impressively. As a well-used pre-production car, the one we road-tested still had a few rough edges. The basic architecture of the surprisingly spacious cabin was in place, but the high-quality soft mouldings that will grace the car when it goes on sale had not yet been fitted. There was also a slightly disconcerting whistle from the exhaust when the range extender engine was working hard, though this can be easily fixed. The suspension settings need a bit of fine-tuning, particularly for ragged British blacktop. But otherwise, the car was extraordinarily refined. It is whisper silent in most conditions—it is mostly hard to tell when the range extender engine is running—and unfussed even at high motorway speeds. Acceleration is strong (0-60mph takes about nine seconds) thanks to the instant torque served up by the electric motor, while the car’s handling is neat and precise thanks partly to the low centre of gravity that is created by installing the T-shaped battery pack along what would be the transmission tunnel in a conventional car.

The Ampera has a range of 350 miles before it needs refuelling and a notional thirst of 175mpg on a long journey which translates to carbon dioxide emissions of about 40g/km. Most of the time, however, the car will run without any need for the petrol engine, the batteries needing only three hours’ charging from a domestic socket to deliver 40 miles of electric-only running. GM reckons that the cost of an electrically driven Ampera mile is a fifth of a petrol-driven mile in an ordinary car. Used daily for a 40-mile commute, the Ampera could save its owner more than £2,000 a year given European petrol prices. As for reliability, the battery is guaranteed against any failure for 10 years. Some of the strain is taken off it by software that stops it being depleted to less that 30% of its capacity before the generator starts working, and prevents it ever being charged to more than 80%. Apart from the battery, there’s nothing much to go wrong, and servicing will be at intervals of around 20,000 miles.