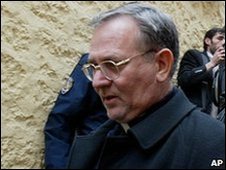 A Roman Catholic bishop has been stabbed to death in southern Turkey, state-run media report.

Luigi Padovese, 63, was attacked in the garden of his summer house in the Mediterranean port of Iskenderun, according to Anatolia news agency.

Police have arrested Bishop Padovese’s driver, a man identified only as Murat A. He was suffering from psychological problems, the provincial governor said.

There has been a series of attacks on Christians in Turkey in recent years.

No doubt there will be wild speculation as to motive besides "psychological problems." We’ll be careful here.