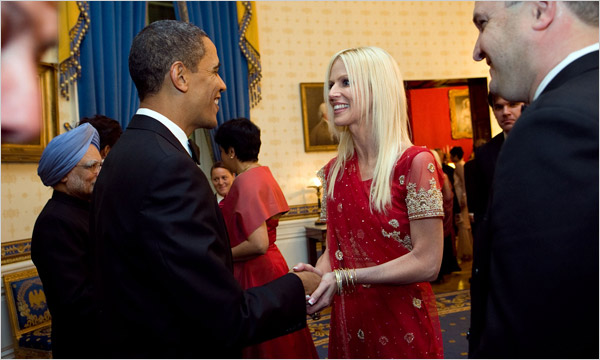 The Secret Service is sorry.

President Obama and his wife, Michelle, had a face-to-face encounter with the couple who sneaked into a state dinner at the White House this week, White House officials acknowledged on Friday. The revelation underscored the seriousness of the security breach and prompted an abject apology from the Secret Service.

A White House spokesman said that the couple, Michaele and Tareq Salahi of Virginia, met and shook hands with the president and the first lady in the receiving line in the Blue Room, as the Obamas greeted each of their 400 invited guests Tuesday night before moving to a tent on the South Lawn for dinner.

That disclosure coincided with a statement from the director of the Secret Service, Mark Sullivan, saying that his agency was “deeply concerned and embarrassed” by the events. Secret Service officials said the agency wanted to interview everyone connected with the episode, including the Salahis, and had not ruled out criminal charges.

“The preliminary findings of our internal investigation have determined established protocols were not followed at an initial checkpoint, verifying that two individuals were on the guest list,” Mr. Sullivan said.

“Although these individuals went through magnetometers and other levels of screening, they should have been prohibited from entering the event entirely,” Mr. Sullivan said. “That failing is ours.”

Again, in our post-9/11-security-hyped world, this just blows me away. After all, the Secret Service didn’t take office for the first time last January.