Simeon Sanders Served US in Iraq; Shot Dead in Harvey 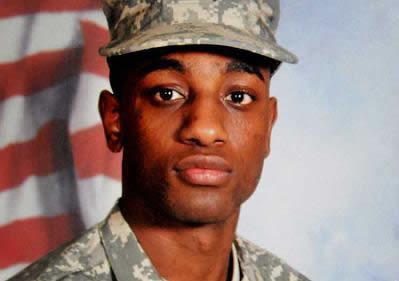 His mother didn’t want him to join the Army.  She was worried about him fighting overseas.  But it was one of us in this country who shot Simeon Sanders dead in Harvey.

One of us. An American.

Sanders, 21, of Harvey, was shot and killed Thursday evening at 154th and Center Avenue in the south suburb while walking with his cousin. Sanders had been home on furlough to visit his family.

The cousins had just gotten french fries at a restaurant and heard men arguing — some on the sidewalk and some in a car, family members said. Wanting to avoid trouble, the cousins tried to cross the street, and got caught in the crossfire.

“They happened to be in the wrong place at the wrong time,” Simeon’s mother, Shannon Sanders, said Saturday while sitting in a room filled with pictures of their large, close-knit family.

Charges are pending against one man.  Police are seeking a second suspect.

I don’t want to talk about gun control.  Instead, I want to know why we can’t control ourselves.  Why do we use guns so freely?

In my classroom, I often tell my students that the United States is the most dangerous country on the face of the earth outside of a war zone.

Look at that young man staring back at you from eternity and ask yourself, “Why?”  Let’s just have a conversation about why this happened.  Twenty-one years old.  Shot in the back.