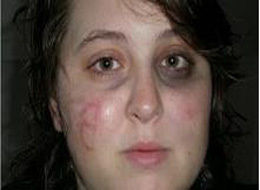 Want to know how to get John McCain and Sarah Palin on the phone?

On Wednesday, Ashley Todd, a 20-year-old college student of College Station, Texas, said she was using an ATM at in Pittsburgh just before 9 p.m. Wednesday when a man approached her and put a knife to her throat.  Todd was in Pittsburgh campaigning for John McCain.

The report gets uglier:

Police spokeswoman Diane Richard said Todd told them the robber took $60, then became angry when he saw a McCain bumper sticker on the victim’s car. The attacker then punched and kicked the victim, before using a dull knife to scratch the letter “B” into her face, Richard said.

“She further stated that the male actor approached her from the back again and hit her in the back of her head with an object, she doesn’t know what the object was, causing her to fall to the ground where he continued to punch her and kick her and threaten to ‘teach her a lesson’ for being a McCain supporter,” Richard said.

The story made the national morning shows Thursday.  By midmorning, Pittsburgh Police said they were suspicious, and by Friday mid-afternoon, police said Todd had made the whole thing up.

Police say a campaign volunteer confessed to making up a story that a mugger attacked her and cut the letter B in her face after seeing her McCain bumper sticker.

At a news conference this afternoon, officials said they believe that Ashley Todd’s injuries were self-inflicted.

Todd, 20, of Texas, is now facing charges for filing a false report to police.

Todd initially told police that she was robbed at an ATM in Bloomfield and that the suspect became enraged and started beating her after seeing her GOP sticker on her car.

Police investigating the alleged attack, however, began to notice some inconsistencies in her story and administered a polygraph test.

There was more to the story.  According to police, Todd also alleged that she was sexually assaulted by this man.  While holding her on the ground, he fondled her:

“She further stated that the male approached her from the back again and hit her in the back of her head with an object, she doesn’t know what the object was, causing her to fall to the ground where he continued to punch her and kick her and threaten to ‘teach her a lesson’ for being a McCain supporter,” Richard said.

“She also indicated she was sexually assaulted as well. She indicated that when he had her on the ground he put his hand up her blouse and started fondling her. But other than that, she says she doesn’t remember anything else. So we’re adding a sexual assault to this as well.”

Talk about your blame-it-on-the-black-man 15 minutes of fame.

Here’s what I don’t get.  Set aside that we now know that Ms. Todd made the whole thing up, possibly mutilitating herself for effect.  Forget for a moment that this is a disturbed young woman who will someday, hopefully, look back on this with rue and wonder, “What the hell was I thinking?”

I simply don’t understand the personal response of two alleged adults from the McCain campaign:

On Thursday, The Obama-Biden campaign released a statement, commenting on the attack. The statement said, “Our thoughts and prayers are with the young woman for her to make a speedy recovery, and we hope that the person who perpetrated this crime is swiftly apprehended and brought to justice.”

The McCain-Palin campaign also released a statement saying, “The McCain campaign is aware of the incident involving one of its volunteers. Out of respect, the campaign won’t be commenting. The campaign also confirms that Senator McCain and Governor Palin have both spoken to the woman.”

McCain and Palin both spoke to her?  What did they say to Ashley the Liar?

Is that all it takes to get Senator John McCain and Gov. Sarah Palin on the phone?  Didn’t the candidates think for a minute that this might be a complete fabrication?  Did the candidates investigate this situation at all?

They should have called conservative blogger Michelle Malkin first.  While I disagree with Malkin’s blanket reprimand to those of us on the left …

And those of you on the left who are now so interested in debunking despicable hate crimes might show a little more skepticism yourselves next time when similar narratives hit the news pages involving politically correct hoaxers who share your politics.

… I agree with her call for a critical eye and restraint when reports like these surface:

Final lesson: Trust your instincts. Use your brains. Stop jumping every time Drudge hypes something in Armageddon-sized font.

My final thoughts are for Ms. Todd.

Go home to Texas after you’ve answered the charges you now face in Pittsburgh.  Get out of the spotlight.  Stay away from the media.  Get help if you need it.  Someday, hopefully, you’ll find that those of us on the left can be pretty forgiving.  You’re actually going to need a real job some day soon, and your future employer, who might even be an African American man, will need to look past this.

But, really, what were you thinking?